This is the Current River style boat. My grandfather got the plans in Doniphan on the Current River in about 1920 and hired local boat builder from near Steelville, MO. on the Meramec River. These boats were built on the site where they were to be used and launched. It usually took a boat builder about a week to complete the boat and 2 paddles. Ours were always 24′ x 4′ (width at the center) tapering to 18″ at the bow and stern.

When completed they were sunk for several days to swell the wood and close any leaks. It took 5-6 men to roll them over and empty them and they would then dry for several days in the sun. Total weight was about 250-300 pounds dry. I watched the last one built in 1960 (I was 13). They used local woods; sassafras, hickory, and some quarter-sawn white oak where straight grain mattered; like gunwales. 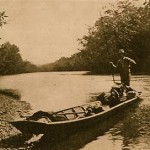 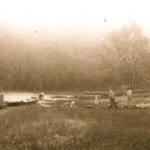 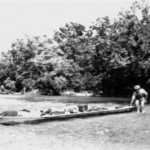 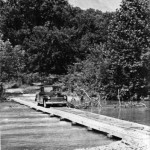 All of our boats were built from the same pattern; except prior to 1920 our family used gig boats to float They were up to 28′ – 32′ long and only 2-3′ wide at the center with an up-swept bow and stern. The were also common of the North Fork of the White River.

As far as the pictures go; to is our 1930 Jon Boat, next; in the 1930’s our boat at Huzzah Meramec junction; next to right is our boat in 1949 at Saranac Spring riffle, next to right in beginning of 3 boat float at Onondaga Cave before the bridge in 1926, next; is the hog trough at the town of Scotia on the Huzzah Creek about 1947.

Getting them back after a float was hard to do without a trailer; usually on a long bed truck with additional oak 2X4″ 16′ long under the boat for additional bracing to keep them from snapping in half on a bumpy gravel road.

Share this page
Snowy day on the North Fork WOW. A Green Snake

Indigo Bunting in all his glory