Fly fishing for Trout at the River of Life

Dusk was drifting down into the valley as I stepped into the river. The last, lingering rays of the sun had left the tall hills in front of me. The river bottom was uneven, moss covered bedrock and I had to pick my way along it carefully to keep from falling. 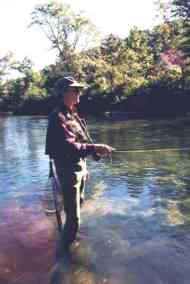 Trout were rising here and there in the river and I waded into position to cast to one. I tied on a parachute blue winged olive and began to work out line in false casts until I had the right length to drop the fly upstream from the trout. I made my cast and the fly drifted toward the trout’s lair. Only a fly fisherman can know the suspense of that moment when the fly drifts over a trout. It reached his position and up he came from his lie on the bottom to inhale the fake. I raised the rod and the fly slipped through his jaw and I missed him.

Now you can talk to me all you want to about dumb animals but I am here to tell you that once a trout takes a fly and it is pulled through his mouth and revealed as a fake he will not hit it again that evening. You get one chance and one chance only.

I looked for and found another and the result was the same. The light was failing fast and I knew I wouldn’t get many more chances. The last fish I casted to was rising upstream from me and slightly to my right. I made a good cast, the fish rose and took the fly and the hook found its way into the fishes jaw. It was an average size brown and gave up to the unyielding pressure of the rod and I slipped out the hook and released him. I waded ashore, fulfilled now that I had caught a trout.

I was on the North Fork of the White River in Southern Missouri with my father-in-law, Fred, for several days of fly fishing and visiting with our good friends the McKees who own and operate River of Life Farm Outfitters on the river. They have several cabins including “the chalet” a pretty, well stocked house on their property.

I have been visiting them at their place for about 13 years now and have never met a more wonderful family of people. They home school their children, all 7 of them, and a smarter, more well behaved, fun bunch of kids you have never met.

I returned to the RV after catching the brown, and proclaimed to “Pop Fred” that the trip was a success if we would have to pack up and leave right then. This was the first time in years I have hit the river when it was low and clear enough to fish properly. We spent the rest of the evening watching a movie on the TV/VCR and then turned in for the night.

Tuesday morning, after breakfast, I tied on a number 10 olive flashabugger and headed downstream from “the falls”. The falls is a rock ledge over which the river rushes to form the trickiest piece of water on the river, from a floaters point of view. I have seen countless canoes run up on the rocks here and swamp and bend around the rocks from the force of the water.

I fished for a hundred yards or so downstream without success and then a small rainbow hit the fly and hooked himself. He put up a good fight, despite his size, with the aid of the swift current and was landed and released.

A few minutes later a fish smashed the flashabugger and I felt the thud, thud, thud, of a bigger fish. I thought it was one of the large browns which inhabit the river but I could just make out the green back and pink side of a wild, streambred rainbow trout. If I had not cut my leader back to a heavier weight tippet, the fish may have broken off. Such was his power downstream from me in the heavy current. But the tippet held and I eventually brought him to hand, a beautiful, healthy, 16″ fish. As I released him, he darted away into deeper water and I knew I had not played him too long and that he was still in good condition and would survive to fight again.Russ changing his fly 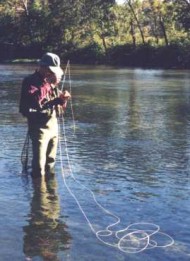 That was the extent of the action for the morning and I returned to the RV for lunch and some R&R that afternoon. For a time I took a lawn chair to the edge of the river and just watched it roll by, drawing my stress and cares along with it. I was reminded of a line of literature I once heard, “I am haunted by waters”. It is particularly true for me.

I passed the rest of the afternoon blissfully napping in the RV and arose to fix an early supper so as to have time to fish the evening rise. After a big meal of steaks and baked potatoes, I suited up and headed upstream to a heavy riffle to try and break the code there. I have snorkeled the river in a wet suit and knew there to be a lot of fish in this particular stretch of water.

I rigged up with a nymph and a lot of split shot to get the fly down near the bottom, but when I got hung up and lost the fly and all the weights, I got disgusted and put on the flashabugger again. I got a few hits before I noticed some fish rising in the choppy water below me.

This was what I had come for, to fish the rises, so I tied on a long piece of fine tippet and the size 18 parachute blue winged olive and waded down to give them a shot.

I got into position above the rising fish and presented the little fly on a downstream slack line cast. The first fish it drifted over came up and smacked it and was solidly hooked. It was a 12’ wild rainbow.

More rises and more fish and I was on a roll. I could raise almost every fish I cast to and hooked most of them. Then as I waded carefully downstream on the treacherous riverbed, I came to another pod of rising fish. I took nearly all of them including another 16″ rainbow. On the tiny fly and light tippet, this fish was more exciting than the 16 incher that morning.

I called to a new friend I had made that morning, who was staying in the chalet, and told him to come up where the action was. He was a brand new fly fisher and could not yet master the drag-free drift and caught none. He and his partner had agreed to go night fishing with me, but both backed out at the last minute and I started alone.

I put on a big dark muddler minnow and started casting blind in the dark. I fished for a time before boredom overtook me and as I reeled in to quit, I discovered that my line had been seriously tangled almost the whole time I had been fishing. No fish would have taken the fly as tangled as it had been. I returned to camp and watched “The Bridges of Madison County” with Pop Fred before we both turned in.

Wednesday morning Pop Fred drove me up the river where I put in at the first riffle below the Casey Hole. Although the water was similar to what I had fished the day before, few trout came to the flashabugger and even fewer were hooked.

I did manage to hook and land one after seeing him rise to a dry fly. I quickly changed to an elk hair caddis and nailed him on the first drift over him. That was the sum of the action for the morning.

After lunch I suited up and drove downstream. I moved over to the edge of the water and waded in to fish a fast riffle with the flashabugger. As I entered the water I scanned the river up and downstream and saw a canoe approaching from upstream. I made a few casts and then turned to look at the canoe passing behind me to avoid catching them with a backcast. As I did so, my left foot went out from under me on the slick bottom and I went in up to my neck!

I struggled to the surface to hear one of the canoeists make a sympathetic remark about the slick bottom. Silently heaping curses on their heads for distracting me, I waded to shore, stomped up to the Jeep and returned to camp to dry out and change clothes. Myron chuckled at me for getting baptized and told me that stretch of water was named “soap and water shoal” for all the baths folks had got there over the years.

After an early supper of grilled chicken, I headed back to the river to fish the evening hatch. A little tan mayfly in about a size 18 was coming off the water and the trout were taking them regularly. I didn’t have a match and spent many frustrating minutes trying to get a hookup.

I finally got one to come up for a weird pattern called a “halo nymph”. I managed to get him in and should have thought to use my stomach pump to find out exactly what they were eating. But I put him back immediately and didn’t hook another fish that night.

Thursday morning I went back down to where I hooked the 16 incher the day before, but the spell was broken, and I only got a couple of hits. I returned to the pool in front of McKees and did manage to get a few rises to dry flies before I had to quit for the trip home. Although I didn’t land any of those trout I got a thrill from it just the same.

Pop Fred and I made one last visit to the McKees and then unhooked for the trip home. Except for forgetting to turn the gas shutoff valve on and spending several frustrating minutes trying to light the hot water heater, the trip went smoothly.

If you would like more information on renting the chalet or another cabin from River of Life Outfitters call Myron McKee at 417-261-7777. Believe me when I tell you it is worth the expense of the cabin just to see that river, even if you never wet a line. If you’re lucky, maybe you’ll get to push one of the kids in the rope swing.